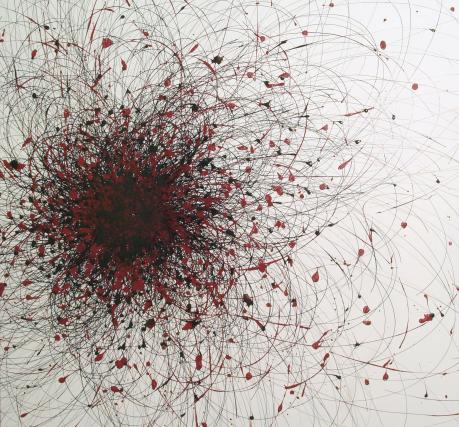 From sub atomic particles with names like ‘up’ and ‘down’ to the paradox of light as wave and particle, opposites are one of the driving creative factors in science. It was Neils Bohr who said, ‘How wonderful that we have met with a paradox. Now we have some hope of making progress.’ This ability to embrace ‘the opposite’ in order to reframe a problem leading to an innovative solution, applies as much to the artist using a new medium, as it does to a CEO looking for new business as it does to a fictional advertising firm needing to save itself from the brink of bankruptcy.

I am an ideas ‘junky’. Either high on dopamine, or waiting for that wonderful cartoon moment in which the light bulb at last reignites. So many new influences recently, from Academia, to Business, to Galleries and Collaborations are forming a huge melange in my head. And so occasionally, my subconscious rewards me with a new insight….which was precisely what happened when I was watching an episode of Mad Men recently. Originally drawn to the drama because of the aesthetic of clothes, sets and relationships, what really excited me was the sudden realisation that this fictional story was a factual creative thinking course.

The episode I thought was simply genius, was the one in which the creative director Draper (visually ahead of his time and highly innovative in his thinking) is at a cross roads with both his business and himself. The agency he heads in Manhattan in the 60’s, has long and with magnanimous complacency, made large sums from the Tobacco industry. However, with the sudden removal of their biggest client, the future appears both bleak and uncertain. The initial and most obvious response from his partners was simply to get more of the same business from other tobacco companies, as that is after all, what they were good at. It is what they have always done. But in a moment of what I think is pure brilliance, Draper looking endlessly at a painting he has recently acquired of which he has little appreciation, suddenly sees the problem from the opposite end and does what they have never done. He decides to deride the Tobacco industry in a full page anti-smoking ad in a major tabloid. Whether a letter of pure moral insight (unlikely) or a sales pitch extraordinaire, it leads to both new business from Cancer research agencies and a huge amount of publicity. It’s the opposite of what most would do. And the opposite saves the agency.

In a world in which some would argue that owning art satisfies no inherent human need, it makes a wonderfully salient point; Looking- really looking- can lead to insights that change our perspective on the world and old problems.
It’s why art is as fundamental to our happiness as any of the other needs on the Maslow Hierarchy of Needs and art provides what every artist hopes for when someone looks at their work:

A rare and beautiful moment of insight.